“It’s not the mountain we conquer, but ourselves.”
~ Sir Edmund Hillary 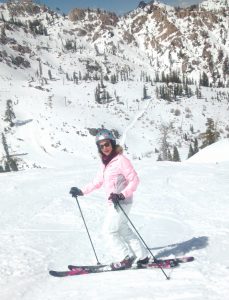 It was a bluebird day; sunny, clear, and cool. I was in my happy place, skiing an alpine mountain. We were on Headwall at Squaw Valley, and although there’s “no easy way down,” the four of us took what we consider a “cruiser run,” on Sun Bowl. I’d traversed off-piste, which means a bit off-trail, such as in the trees, into the ungroomed outer boundaries. The snow is deeper, which is why we love it as we dive into danger. 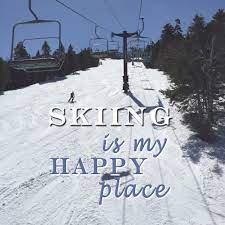 Those feelings that skiing elicits were all there; sheer joy, excitement, inspiration, and pride. I felt great all morning. I was in my zone, dialed in, confident. Even as I glided down the fall line just before I injured myself, I carved dynamic turns, balanced over my legs, weight forward. (The “fall line,” is the route an avalanche would take if rolled down the mountain.) 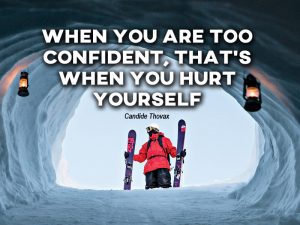 As my skis loaded onto fresh tracks, they stopped abruptly. I had committed to my next turn, but my skis seemed to be buried in cement. Others call it bulletproof terrain. No matter how hard you try to punch through, it doesn’t budge. This is heavy snow, which is problematic if you get into the think of it.

Well… I got into the thick of it, and shit happened. I was in the crud, jump-turning to plow through it. Even though I did what I’m supposed to do by transferring my weight onto the downhill ski, then quickly applying pressure to the outside ski while thrusting my hips into the next turn, my skis didn’t follow. Then I did what no skier should do: I leaned back. Horrors! I hadn’t broken this golden rule of skiing in decades, and pop! The sensation of pain as I twisted my knee and fell on my butt was sharp.

“Are you okay?” came the voice of a young man on a snowboard.

“I don’t know!” I answered because, well, I didn’t. Although I did. I just didn’t want to accept it.

“Let me know if I should call ski patrol,” he kindly offered.

Ski Patrol? No, please. I’ve never gone down in a rescue toboggan. That would never be me! I felt determined to get up and finish the day. It’s only my second day out this season.

“Take my hand,” he said, watching me struggle to get up.

As he helped me onto my skis, I felt compelled to blabber on about how I’ve dropped out of a helicopter onto a cliff with no helmet on in my younger days, jumped off cornices, raced icy courses, crashed into gates, and never got hurt. I knew it was all said out of nerves as I stretched my injured leg (how the heck I did that, in hindsight, is mind-boggling), and took the first turn with my weight on my uninjured leg.

As soon as I transferred my weight onto my injured leg, I collapsed like there was no muscle remaining in my body. I felt like Gumby, flexing but flimsy. I screamed again, not just out of pain. It was despair that I realized I will take that toboggan ride after all; anguish because Covid-19 cut my ski season short last year, and injury will put me out of commission now. Another ski season lost? Possibly the next? It’s the end of the world!

I love skiing. It’s as much a part of me as breathing. I sat in the snow and wanted to cry. But I started laughing, hysterically. “I turn 60 this week, is this what happens when we get older?” I said to the snowboarder, who patiently waited with me. “I definitely can’t ski down.” 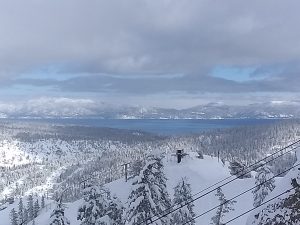 “I’ll call ski patrol,” he said. He could likely see how frantic I was because of my high-pitched laughing.

My hands shook as I made a call to my husband, son, and friend who must have been worrying about where I was. I’m never far behind them.

The toboggan came so quickly I barely had time to tell my family and friend what happened. Before long, ski patrol securely strapped me into the sled, as I remained laughing like a nervous hyena. “You’re in good spirits for someone that’s injured,” said one of the three patrols surrounding the sled with ropes to pull me down the steep trails. I felt like a human rocket being launched from the mountaintop.

“You have to be a little crazy to be a downhill skier.”
~ Lindsay Vonn

“Just think of it as a Disneyland ride,” said one ski patrol. And with that, he had me singing, “It’s a Small World,” as the sled screamed down the steep trails, banging off the sides of crusty bumps.

There’s no question skiing is risky. The inherent danger is one thing I love most about my favorite sport. It’s an adrenaline rush, physically and mentally. But with this season being my 57th on skis and never getting hurt until now, injuring myself was rarely on my mind while whooshing down the slopes. In the past decade, I might have fallen once, if that. I’d always catch myself when off-balance. The most I’d ever hurt is my ego when other racers had continuously beaten my personal best time by split seconds. 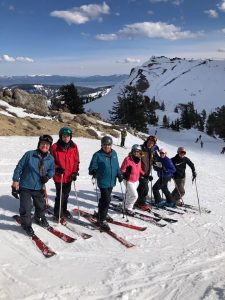 This changed on February 16, 2021, with this fluke of a fall. I sustained multiple injuries to my left knee. The MRI report is exhausting, it almost hurts to read. Although I won’t go into meticulous medical detail, I ruptured my anterior cruciate ligament (ACL), sprained my medial collateral ligament (MCL), tore my meniscus, and suffered three bone fractures. There’s additional soft tissue damage as well. When I went in for the follow-up visit to discuss the MRI images, my orthopedic surgeon said, “I won’t sugarcoat it. You did a number on that knee.”

It hit so fast; I keep going over in my mind what happened—or how it happened. Seriously, after trying crazy stuff like heli-skiing, braving the palisades at Squaw, racing through icy gates, being a past ski instructor on some gnarly terrain, and overall pushing myself while never getting hurt. Why Now?

I know it will take a while to recover, at least 9 months to a year after surgery before I can ski again. But it’s not just the physical rehab that concerns me. Skiing is a mental game. My confidence is shaken, not in my skiing ability, but whether my body and mind will heal enough to ski with the gusto I did. It’s the emotional rehab I worry about and getting my “mojo” back. Mojo means the flow, the guts, the rhythm, and the determination to keep at it. It’s about letting go, getting out of our minds, and trusting our physical strength to conquer the fear factor.

Through my research I found there’s a piece of equipment I can buy actually called a “ski-mojo.” It uses a spring recoil technology that takes up to a third of the strain off the legs and knees through kinetic energy. I’ll be the bionic woman! No matter what it takes. I WILL ski again. 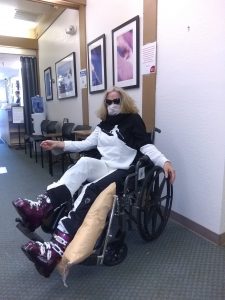 If there’s a silver lining in this, it’s that I’ve become more inspired to write, including reaching out to agents, publishers, and others in the literary world and wrap up my Masks Trilogy. Writing, like skiing, is a huge passion of mine. It makes me happy. I like to write words that induce emotions in readers, to make them feel. If I can’t have my ski therapy for a while, at least I have the healing power of writing such as its increased coping strategies.

I’m a firm believer in the saying, “If you can feel it, you can heal it.” Writing is no stranger to therapy.