“Abnormalize war. Treat it like the despicable horror that it is. Stop marching to the beat of the war drums. Turn and face the front doors of the elevator like a normal person. Stop standing up in the waiting room like a weirdo whenever that bell sounds. They are working to manufacture your consent. Give them nothing other than your adamant, screaming refusal. 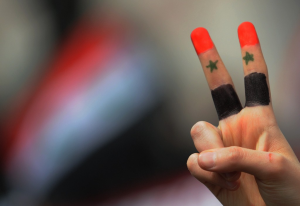 National Geographic’s Brain Games aired a social experiment a while back which produced some footage which, while jarring, shouldn’t surprise anyone who takes an interest in the way people tend to operate when in groups.

A waiting room was filled up with actors for the show, with one real patient waiting for an actual eye doctor’s appointment. Every few minutes a bell was rung, at which time all the actors would stand up for no discernible reason and then sit back down. The real patient was confused by this behavior at first, but by the third bell she was standing and sitting in unison with the rest of the herd.

The subject of the social experiment continued standing and sitting whenever the bell rang even after the show actors had been away for fake appointments and she was left alone in the waiting room and continued to stand even when joined by a second real optometry patient. She then showed the new arrival how to stand and sit when prompted by the bell.

There have been many such social experiments carried out for televised entertainment over the years, starting with the famous Candid Camera elevator experiment in which the subject quickly conforms with a group of actors who face the wrong way in an elevator car. These playful explorations of the human impulse to conform make for easy laughs, but they also provide tremendous insight into why society operates the way it operates.

Have you ever found yourself in the unfortunate position of having to explain what war is to a young child? It’s a very awkward and uncomfortable task most of us find ourselves assigned with at some point in our lives, and I can’t think of a better illustration of what it feels like than the subject in the Brain Games experiment sheepishly explaining to the new arrival that she’s standing up whenever the bell rings because that’s what everyone was doing when she got there.

To a child who hasn’t yet been indoctrinated into an insane world where explosives are dropped from the sky upon strangers on the other side of the planet for reasons nobody quite understands, this behavior looks like the most bizarre and horrific thing imaginable. If you were to bring in someone from an alternate reality wherein humans have figured out how to function in a healthy and sane way, I am sure they would have a similar experience.

Until war has been normalized for you, it’s the most insane thing that anyone could possibly imagine. We arrive in this world innocent and untarnished by propaganda and cultural mind viruses, but we are indoctrinated into a profoundly sick way of functioning before our capacity for abstract thought is anywhere close to being fully formed. And before we know it many of us find ourselves answering a child’s “Why?” questions about war with a shrug and a “That’s how it’s always been.”

And now we have groups that have a historical tradition of opposing the agendas of the US-centralized war machine actively cheerleading for escalations against Russia and regime change in Syria. Trump’s hawkish maneuvers against Russia, already far in excess of any ever undertaken by Obama, are being condemned by Democratic party leaders as grossly inadequate. Even some proper leftists who claim to oppose the predatory capitalism of the neocon centrists are now actively cheerleading for the longstanding CIA agenda of regime change in Syria. The obvious reality has been obscured that US military interventionism in the modern world is literally always disastrous, literally never helpful, literally always extremely profitable for military-industrial complex plutocrats, and literally always based on lies.

This is not because these political factions have weighed all the evidence and thought critically about what is happening. It is because everyone else keeps standing when the waiting room bell rings. It is a well-documented fact that the western empire planned the 2011 uprising in Syria years in advance. It is a well-documented fact that this same empire has an extensive history of using lies, propaganda and false flags to manufacture support for preexisting military agendas. If you’re ignoring these glaring facts and the growing mountain of plot holes in the establishment story enough to jump on the “Assad must go and Putin must be stopped” bandwagon, it’s because war has been normalized for you. You are turning to face the back of the elevator because that’s what everyone else is doing.

I write constantly about my concern that the ongoing escalations against Russia, Syria and Iran could lead to a third world war and possibly nuclear armageddon, but amazingly few people have ever engaged me on the subject. They’ll nitpick on the details, they’ll tell me “17 intelligence agencies” confirmed the Russian hacking narrative, they’ll tell me Assad is a butcher so of course, he killed children with poison gas for no discernible reason, but they virtually never attempt to argue that these escalations we appear to be headed toward aren’t a real threat or that they are necessary and worth the risk.

This is because people aren’t thinking. They are following. If the factions supporting the new cold war against Russia and interventionism against Syria were thinking clearly about their own positions, there would be a robust mainstream argument addressing the concerns people like me keep voicing about a third and final world war. But there isn’t. There’s nothing. This is because that side of the argument is compartmentalizing away from the consideration of uncomfortable possibilities which interfere with the enthusiastic promotion of longstanding power agendas. The talking heads on TV beat the war drums and the mindless masses march in time.

We need to de-normalize war. When we see talking heads promoting a sequel to the Iraq invasion with Iraq’s next-door neighbor, we should all be recoiling with horror in the same way we would if they were promoting cannibalism or pedophilia. History has taught us beyond a doubt that saying humanitarian problems can be solved with US military interventionism is like saying a crumbling building can be fixed with TNT, and we should respond to such claims accordingly.

These people are not promoting a differing political ideology, they are promoting death, destruction, destabilization and terrorism. The resurfacing of longstanding neoconservative agendas should be met with nothing other than rejection and revulsion.

Abnormalize war. Treat it like the despicable horror that it is. Stop marching to the beat of the war drums. Turn and face the front doors of the elevator like a normal person. Stop standing up in the waiting room like a weirdo whenever that bell sounds. They are working to manufacture your consent. Give them nothing other than your adamant, screaming refusal.